When Kangana Ranaut and Karan Johar are mentioned in the same sentence rest assured it’s because these personalities are taking a dig at one another. While Ms Ranaut never misses an opportunity to call Karan the flag bearer of nepotism, she recently shared a video of her snubbing the director when she was just a teen.

Even though she was a newbie when this incident took place at the Filmfare Awards in 2007, we have to say she had the same attitude and the actress agrees with us too. Check out her post below.

Sharing a fan post to her Instagram stories, Kangana Ranaut simply captioned it, “Haha mera attitude pehle se hi kharab hai (my attitude was always bad).” In her subsequent story, the actress – with the same fan post, added, “This is my first year in the industry, I was a teenager lekin attitude aisa hi tha (but my attitude was still like this).” 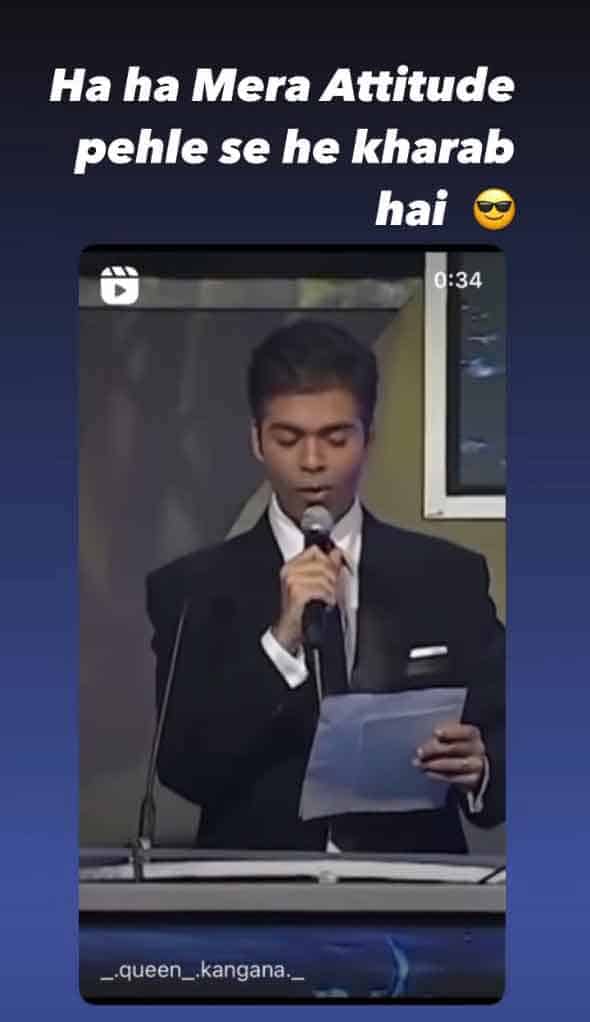 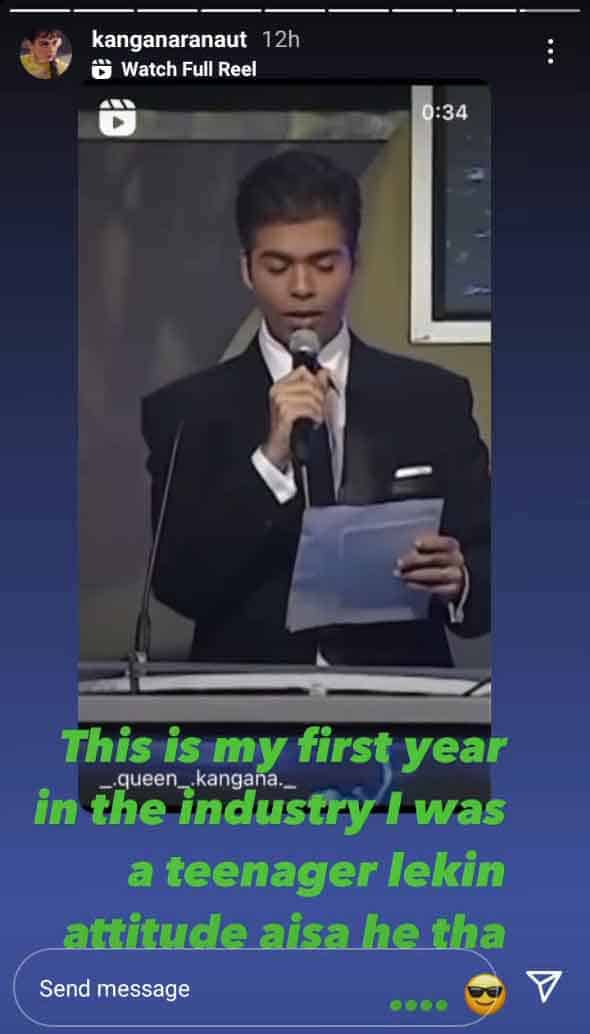 Talking about the video, it shows Kangana Ranaut receiving an award while ignoring Karan Johar as he speaks to her. The video showed Karan hosting the awards ceremony and announcing the next award. He says, “This award has been decided by public poll and I have been winning it for the past three years.” The clip then cut to Kangana being announced the winner and her gracing the stage in a green, deep-neck gown with sequin work on the neckline to receive the trophy.

It’s here’s where things get interesting, as Kangana walks away from the stage after receiving the award and thanking all, Karan tried to get her attention but appeared to be snubbed by her. He is heard saying, “Thank you, Kangana and congratulations. I am here,” before adding, “If that matters at all.” On receiving no response from the Queen actress, the Kuch Kuch Hota Hain director said, “Doesn’t seem to. Alright, okay, well done, Kangana.”

Getting back to Karan Johar and Kangana’s equation, it was during her appearance on Koffee With Karan in 2017 that Kangana called Karan the ‘flag-bearer of nepotism’ and ‘movie mafia’. Since then, she has often accused him of conspiring to sabotage the careers of outsiders and promoting star kids.

On the work front, Kangana Ranaut has a relatively full plate and will be seen in Dhaakad – where she will be seen playing a spy; Tejas – where she plays an Indian Air Force pilot and Sita: The Incarnation – a film that will see her play the titular role of the Hindu goddess. She will also direct and star in Aparjita Ayodhya and Manikarnika Returns: The Legend of Didda.

Stay tuned to Koimoi for more.

Must Read: When Deepika Padukone Was Shooting ‘Lungi Dance’ With Shah Rukh Khan, Ranveer Singh Tried To Woo Her!

‘The Longest Goodbye’ Review: A Heartfelt Look at the Human Side of Space Travel | Sundance 2023