Tyler Perry’s Sistas started off with a bang this Wednesday and never slowed down. That’s because Aaron gave Karen an ultimatum after she accidentally called him Zac’s name while they were making out.

He told her to make Zac talk to her so she could get everything off her chest and move on. Aaron also said he didn’t want to hear from Karen until she was over Zac. You tell her, Aaron!

Karen called Zac from the salon at least two times, but Zac didn’t pick up. When the scene transitioned to Fatima and Zac, Fatima told Zac that Karen was calling him, but he said he didn’t want to talk to her. He said the three years he was with Karen was time wasted, and he wanted to marry Fatima someday. The two flirted and joked, and Fatima went to work, and Zac still didn’t call old girl back.

But Karen didn’t give up so easily. She then called Andi and demanded to know if Fatima and Zac were a couple. Andi refused to answer her questions and said she didn’t want to get in the middle of things. Karen grew angry with Andi for not being a better friend and spilling the tea and hung up on her.

After that, she yelled at Pam for eavesdropping. Pam is annoying, but like she said, it’s not her fault Zac is ghosting Karen.

The hairdresser tried one more tactic and gave Danni a call because Danni and Zac work together at the airport. Danni told Karen if Zac was avoiding her, it was his way of saying their relationship was over. Karen refused to listen and said she needed to hear it from him and was coming to the airport, even though Danni said Zac was about to leave. 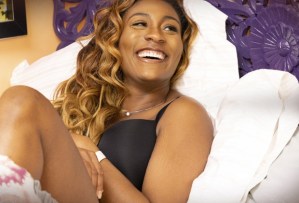 Besides, Danni had her own emotional tug-of-war going on with Preston. Earlier that day, as Preston got ready to leave for work, Danni acted as though she didn’t want him to leave her place, which didn’t make a ton of sense because she’s the one who said she needed space.

Preston said in learning to give Danni room, he discovered he liked being independent of her, too. He also said he was going to get his own place, somewhere between Danni’s apartment and his job so he could be close to both.

Andi, meanwhile, turned down Robin, who asked her out on a date. She said she was still working things out with Gary, but Robin never stopped trying to change Andi’s mind. There was even a hot and steamy moment when he got her to talk about a dream date between the two of them.

Down the hall in Fatima’s office, that weirdo Hayden was snooping around her desk again while she was away, and she caught him. Hayden also mentioned Fatima’s dented rim, a lie she had told a friend to get out of going out, and that’s when Fatima realized Hayden had been listening in on her calls. When Fatima told Andi about Hayden spying on her, Andi came up with a clever way to catch him in the act.

Unfortunately, Fatima found out about Hayden’s snooping too late because when Zac went to check on his investment property, Hayden was there to make a backup offer and to ruin Zac’s dreams.

What did you think of this week’s Sistas, and do you think Andi should tell Karen what she knows about Fatima and Zac? Drop your thoughts in the comments.

The “Freeridge” Cast Reveal Which “On My Block” Character...