Diwali 2021: Only This Little Munchkin Can “Distract” Kareena Kapoor From Posing. See Her Pic With Saif Ali Khan And Sons

Diwali at Kareena Kapoor Khan‘s house was a festive bash with lights, colours and hearty smiles. And, the actress gave us a lovey sneak peek into her celebrations. Kareena posted one of the most adorable Diwali postcards on social media. The family of four – including Kareena’s husband, actor Saif Ali Khan and their children Taimur and Jeh – look fabulous in ethnic wear. But what sent us gasping for air is Kareena’s slant gaze at baby Jeh and the little one’s preoccupation with his mother. Kareena seems to be too busy with Jeh to pose for the lens. The actress confessed this in her caption, where she wrote, “The only one who can distract me from posing.” Then she added, “Happy Diwali, Instafam… love you all…” Can’t miss Saif and Taimur’s twining game here. Aren’t they father-son goals?

Kareena Kapoor’s sister-in-law Saba Ali Khan commented, “Happy Diwali to each of you. Lots of love.”

Kareena Kapoor wasn’t the only one to gush about Jeh on social media. Kareena’s sister, actress Karisma Kapoor, who was also present at the party, was equally excited to be around Jeh. How do we know, you ask? The actress shared a photo where she carries Jeh in her arms and smiles for the camera. Karisma wrote, “Such a special Diwali with my J baba. Love and light.”

Hey, wait we have more glimpses from Kareena Kapoor’s Diwali celebrations. Take a look at this video on Instagram Stories where Karisma Kapoor is burning some Diwali sparklers with Kareena. 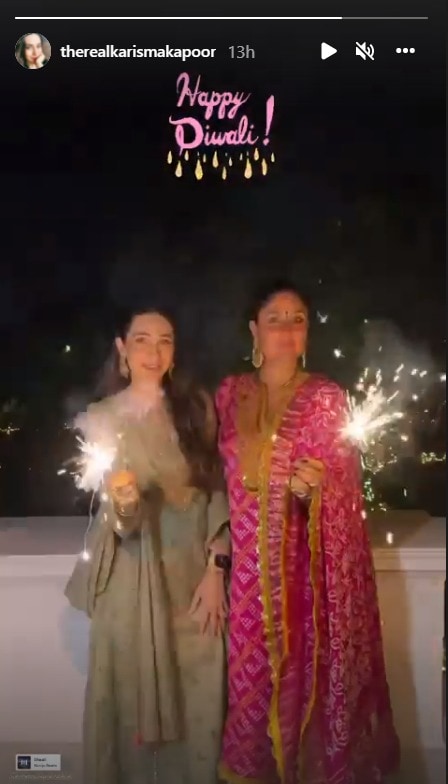 Karisma Kapoor also posted a photo on her timeline with her sister. The two of them look stunning in their festive ensembles while posing beside each other. Karisma wished a happy Diwali to her Instafam through this post.

Kareena Kapoor and her family took it on their shoulders to spread joy this festive season. In an earlier post, Kareena shared a photo of Saif Ali Khan playing with Jeh. The cute snapshot caught the father-son duo in a moment of fun and joy while the two frolicked on a mat with Jeh’s toys. Kareena captioned the image, “Love and light” with a heart emoji.

The CW Poll: Which 2 of These Shows Should Be Renewed for Next Season?