Narcos: Mexico Boss on How Bad Bunny Came to Be Kitty — Plus, One Cast Member’s Real-Life Tie to This World

Setting up Narcos: Mexico for its third and final season meant spinning the story forward beyond Miguel Angel Felix Gallardo’s (Diego Luna) capture/arrest, and establishing the splinter cartels that emerged soon after he was gone.

The story — which is based on real people and events — also had to recapture the interests of existing fans, who may have forgotten some details (Season 2 wrapped in February 2020, after all), while attracting new viewers. Whether or not the drama is able to pull off this daunting feat will be revealed now that Narcos: Mexico Season 3 is streaming on Netflix.

“That’s the challenge,” series co-creator Carlo Bernard tells TVLine. “Knowing it was going to be our last season, I wanted the series to feel like it’s still doing new things, while delivering things about the show that people like. I was trying to strike that balance and introduce new components, so the show doesn’t feel like it’s repeating itself.”

One of the ways Bernard and company did this was adding rapper Bad Bunny (aka Benito Antonio Martinez Ocasio), who will costar as well-heeled hitman Arturo “Kitty” Paez. Kitty was part of a group known as the Narco Juniors —  middle and upper class Tijuana teenagers who hung out with members of the Arellano-Felix cartel for the fame and glamour.

“When we were writing the season, I was told that Bad Bunny wanted to be on the show,” Bernard reveals. “And I knew it was a big deal because my assistant was so excited. That’s when I realized we should definitely be doing this. We had to try to find a way to figure out his schedule, and he was great about trying to shift things around so he could spend as much time with us as possible.”

The end result is Bad Bunny playing a posh club hopper with a penchant for violence, just as the real Kitty was some three decades ago.

“It felt like a fun way for Bad Bunny to lean into his charisma,” Bernard shares. “He was terrific and had a really great time. All the cast and crew really liked working with him.”

Exploring real-life killers like Kitty also allowed Narcos: Mexico to unpack how cartels south of the border morphed, mutated and expanded in the 1990s.

“We’re talking about rich private-school kids who would hang out with the Arellanos in nightclubs and they were sort of drawn into their circle,” Bernard says. “These were kids who came from well-respected families, who were lured in by the lifestyle, and became a very violent aspect of the Arellano organization. They would drive across the border and go to Beverly Hills to shop and party and they were driving BMWs, so nobody ever thought to stop them.”

Jose Maria Yazpik since Season 3 of Narcos has played Amado, a character who used to be Gallardo aka El Padrino’s (The Godfather) trusted lieutenant until Amado betrayed him. On the latest and final season of Narcos: Mexico, viewers will see Amado rise in rank.

In a strange twist of fate, Yazpik grew up with the Narco Juniors, so he remembers Kitty and his buddies all too well. 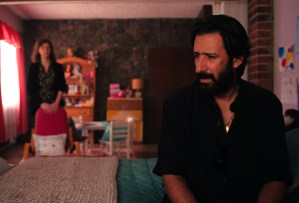 “I used to carpool with them,” Yazpik recalls. “I charged them $5 a week so I could put gas in my car and have some lunch money. We went to the same school and would go across the border from Tijuana to San Diego and back five days a week. We studied together, lived in the same neighborhood, and went to the same country club. I knew them very well and the Arellanos and many others.”

Sadly, it isn’t hard to guess how those same friends’ lives played out.

“Most of them are dead now,” Yazpik notes with a sigh. “It’s a tragedy, because these are people who had everything going for them until they got sucked into this horrible, horrible drug world. It’s depicted quite frankly in this series. People I know in Tijuana call me and ask if the show is really going to talk about this and that and Kitty, and I say, ‘Just watch the series, man.’”

Are you excited about Season 3 of Narcos: Mexico? Drop your thoughts in the comments.

Box Office: ‘Avatar: The Way of Water’ Staying Afloat at No. 1 in Seventh Weekend of Release

‘Avatar: The Way Of Water’ Moves Up To No. 4 Biggest Movie Ever Global, Leaving ‘Force Awakens’ In Its Wake

Pete Davidson Was Spotted With Chase Sui Wonders And...