While Dune isn’t quite living up to the most optimistic predictions, it’s doing enough to be considered a success so far, with Warner Bros. projecting it will earn $40.1 million domestically by close of business today. That includes $9.03 million from 404 IMAX screens, which amounts to 22.5% of the nationwide total—one of the highest opening-weekend shares for IMAX in history. Clearly a segment of the population is keen to see it in all its glory on the biggest screen possible. All told, it’ll do $17.8 million in business from IMAX screens around the world this weekend.

Here’s how the weekend looks as of Sunday morning… 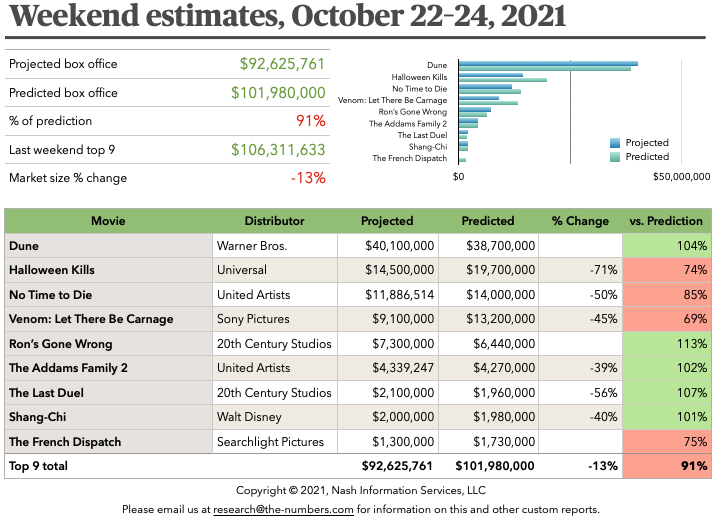 Dune is marginally beating our Friday-morning prediction, although the ratio between its Thursday preview earnings and full weekend box office is going to be around 7.9, which is quite low (No Time to Die had a multiplier of 8.8 two weeks ago, by comparison). Our model expected it to open with around $30 million, given it’s the first episode in a new franchise, and it’s playing on HBO Max simultaneously, so this result is an undeniable victory. The concern is that the low weekend multiplier is an indication of weak legs. Audiences have generally been very positive on the movie (it has a 91% Audience Score on Rotten Tomatoes right now), but if they decide to rewatch it at home, rather than shell out for another theater ticket, it is likely to fall away quite quickly.

That’s the fate of Halloween Kills this weekend. It was released simultaneously on Peacock, and has fallen 71% this weekend to $14.5 million—quite a bit more than the model was expecting. That might be streaming availability dragging it down, but the two other films in the top four, No Time to Die and Venom: Let There Be Carnage, both fell more steeply than the model predicted. So it’s just as likely to be the result of Dune drawing moviegoers away from the other big movies.

Ron’s Gone Wrong will land in fifth place this weekend, but is actually doing comparatively well compared to our model’s prediction. Disney is hoping it will hold strongly over the next few weeks thanks to a gap in new releases of family movies between now and Clifford the Big Red Dog’s debut on November 10. That might prove to be optimistic, but an audience score of 96% on Rotten Tomatoes suggests it has a shot at staying around a while.

The final new release of the weekend, The French Dispatch, will post an excellent $1.3 million this weekend from just 52 theaters. Its $25,000 theater average is the best for any film this year, beating Venom’s $21,310 on opening weekend. As I mentioned on Friday this was a very hard film to predict, and it’s off to a great start even if it’s falling short of what the model thought was possible.

The one bad piece of news this weekend is that it looks as though the market as a whole will fall short of $100 million. That’s probably attributable in part to some wintery weather around the United States, but it also looks as though Dune pulled the audience away from other films more than it drew new audiences into theaters. That’s a worrying sign as we head towards the key Holiday Season, but I think it’s fair to say that October overall has worked out about as well as anyone should have hoped for.

Internationally, Dune is projected to bring in $47.4 million this weekend for an overseas total of $180.6 million and $220.7 million worldwide from 76 markets. It opened with $22.2 million in China and $7.5 million in the United Kingdom—both solid results, but in keeping with how it’s been performing in other countries. It will bring in a slightly more disappointing $3.4 million on debut in South Korea, and is opening with about $2.0 million in Mexico, $1.3 million in Poland, and $896,000 in Brazil. Its top markets overall, aside from the US and China, are France, with $27.4 million; Russia, with $20.8 million; Germany’s $18.9m; $8.8m in Spain; and $8.2 million in Italy.

Ron’s Gone Wrong will hit $10 million internationally, led by $2.4 million in the United Kingdom, where it opened last weekend.

‘Orphan: First Kill’ Review: Isabelle Fuhrman Is Marvelously Deranged in a Prequel That Should Satisfy Fans