Weekend predictions: Eternals’ $9.5 million in previews points to weekend in the mid-70s – The Numbers


Disney’s Eternals, the latest outing for the MCU, got off to a strong start on Thursday evening, with $9.5 million in preview earnings, according to the studio. That’s a bit more than Shang-Chi’s $8.8 million, but somewhat less than the $13.2 million earned by Black Widow. That points to an opening weekend in the mid-$70 millions.

As usual, I’ve run two models. One based purely on prior opening weekends for similar movie, and the other based on how the previews stack up. 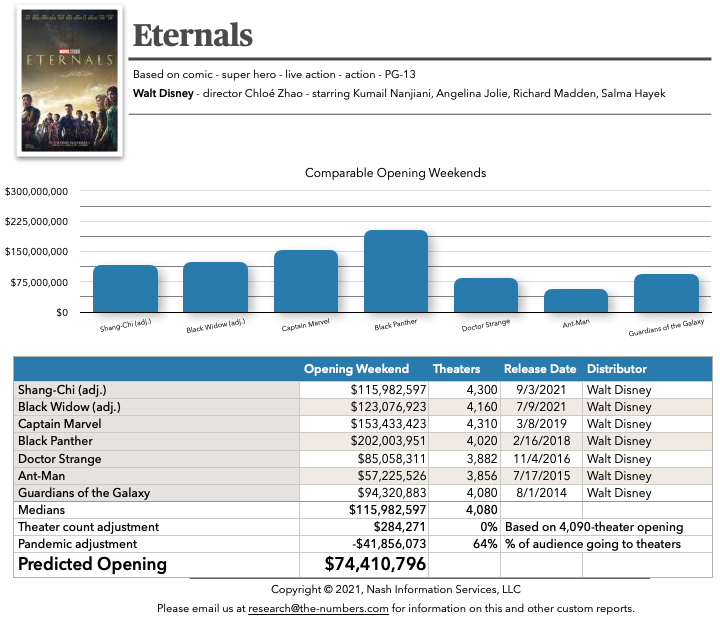 The two predictions are very much in line with one another, which gives me some confidence in our final prediction for the weekend: $76.7 million. That’s the average of the predictions based on the two models.

The only reason for pause is that Eternals has some competition from Dune, which might pull it down a bit. (It might also drag down Dune’s numbers too, of course.) Anything less than $70 million, or more than $80 million for that matter, would be a surprise, though. 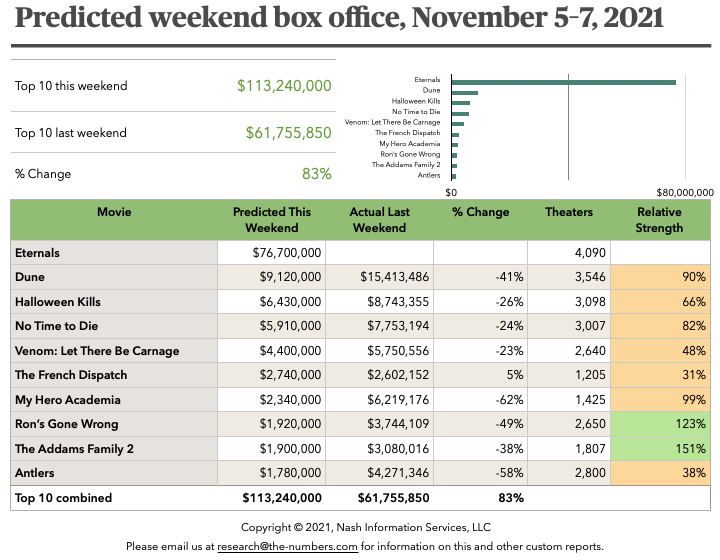 Eternals will dominate the market this weekend, with the model not expecting any other film to crack $10 million.

You might notice that Spencer doesn’t appear on the chart above. That’s because the model is predicting an opening less than $1 million for the highly-anticipated drama. While I feel the film will probably do better than that, probably at least partly at the expense of The French Dispatch, Spencer’s distributor, Neon has only released a handful of films wide on opening weekend. As it showed with Parasite back in 2019/2020, Neon can conjure up impressive runs at the box office, and Spencer could be another breakout hit for them. We’ll know more as the weekend progresses.

Christina Ricci Hates Her Performance in 1995’s ‘Casper’: ‘I Am Terrible in It’