Weekend predictions: Eternals favorite to win weekend, Clifford could be close behind – The Numbers


Eternals should stay top at the box office this weekend, based on our model’s Friday-morning run. But Clifford the Big Red Dog has been putting in very respectable numbers so far and could be surprisingly close to the Marvel if it holds on well through the weekend. Here’s how things stack up this morning…

The challenge in predicting Clifford’s opening weekend is that very few family films open on a Wednesday outside of the main family holidays of July 4th, Thanksgiving, and Christmas. In fact, there have only been five such releases since The Polar Express started out on its journey 17 years ago. That particular movie, although associated with Christmas, is the only one to have the exact same release pattern as Clifford by opening on the day before Veterans Day. It had a notable uptick in business on Veterans Day while Clifford’s numbers for the holiday were much more in line with all the other Wednesday openers.

If Clifford performs as well as the median comparable film, Herbie: Fully Loaded, it’ll end up with a weekend around $18.2 million. At the low end, if it scores in line with The Smurfs 2 it’ll get closer to $13 million. My hunch is that it won’t get much more than $15 million, but there’s so little data to go on that the range of uncertainty is unusually high for this one.

Even if it “only” gets to $15 million from Friday to Sunday, Clifford will be handily ahead of PAW Patrol: The Movie, which opened on a Friday and made $13.1 million in its first three days. That film had a similar hybrid release on Paramount+. 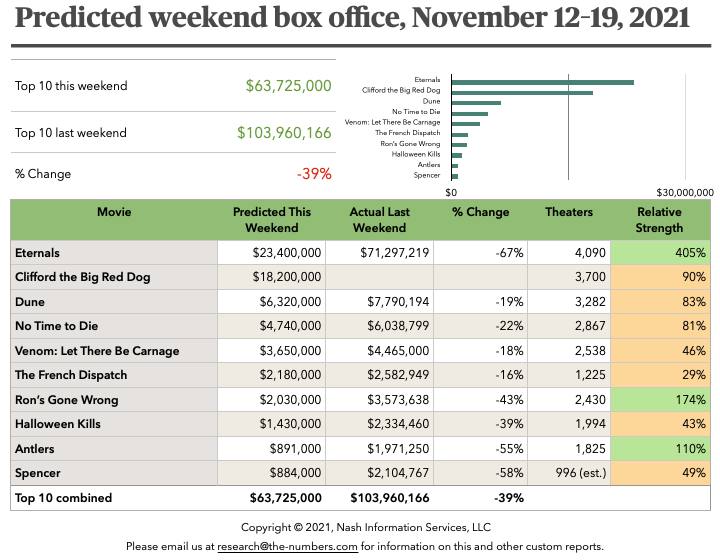 If Clifford comes in higher than $18.2 million, it could push Eternals for top spot, but it would take a really dramatic fall for the MCU movie for it to end in second place. The model thinks it will decline by 67% to $23.4 million, but a 70% fall isn’t out of the question. The Suicide Squad fell by 71% in its second weekend, for example. The previous two MCU outings this year did better than that though. Black Widow was off 68% in its second weekend and Shang-Chi fell 54%. Black Widow had a hybrid release with Disney+, of course, which almost certainly hit its second weekend numbers. Given Eternals is still playing exclusively in theaters, perhaps it can come closer to Shang-Chi’s performance. If it does, it’ll top $30 million for the weekend. That’s an ambitious target, but doable.

All in all, I think the model might be putting Eternals and Clifford the Big Red Dog a little closer to one another than is warranted, and Eternals will pull off a fairly comfortable win this weekend. But Paramount should come out of the weekend fairly happy in either case.

Shilpa Shetty to Bipasha Basu: Kisses that created scandals in B-Town | The Times of India