Psych 3’s Timothy Omundson Opens Up: ‘It’s a Pretty Incredible Thing’ to Have Lassiter’s Journey Mirror My Own

Omundson suffered a major stroke in April 2017, just as production on the original Psych: The Movie was getting underway; as such, Lassiter only appears via a brief FaceTime call with Juliet. Psych 2: Lassie Come Home, as its title suggested, brought Omundson back to a greater degree, pinning the central mystery on the shooting of Lassiter, who then also suffered a stroke from which be started to slowly recover throughout the TV-movie.

Psych 3: This Is Gus — premiering this Thursday, Nov. 18 on the Peacock streaming service — features Omundson as ambulatory as ever since his real-life stroke, to a far greater degree than his smattering of This Is Us guest spots. The premise for the threequel: In preparation for a shotgun wedding before the birth of Baby Guster, Shawn (played James Roday Rodriguez, who co-wrote the movie with creator Steve Franks) and “Groomzilla” Gus (Dulé Hill) go rogue in an attempt to track down expectant Selene’s (Jazmyn Simon) estranged husband. Meanwhile, Lassiter grapples with the future of his career.

TVLine spoke with Omundson about Lassie’s rather introspective journey ahead, whether more This Is Us appearances will follow This Is Gus, and more.

TVLINE | I looked it up and it was almost six years ago that you and I last talked, for the Season 2 finale of Galavant.
That finale, man, that was good. I was going through my photo album today, on my phone, and yeah, we were shooting some of the scenes for that about six years ago today.

TVLINE | You told me back then that your wife was not approving of the hobo-chic beard that you had grown for you role as King Richard.
Six years and nothing has changed — and it’s gotten even worse, I would say. Because of my stroke, I can’t quite shape it the way I used to, so those duties have not fallen to her. She likes to shear me like a sheep.

TVLINE | Well, Lassiter is looking downright dapper in that scene from the Psych 3 trailer, standing at the top of the police station steps with a cane. What do you want to tease about what’s going on there?
Well, I really don’t want to use the word “beg,” but it’s appropriate to say that I begged Steve [Franks] and James [Roday Rodriguez] to write the beard into this movie, because when I saw what I looked like without the beard in the second movie — which had been a long time since Season 8, where I was super-svelte and in shape…. Let’s just say I was appalled at how much weight I’d put on since then, and how jowl-y I had gotten. So I was like, “Guys, please, please, please, can we let Lassiter have a beard?” And James, of course, with his prolific beard, was always for it, and then Steve very kindly said, “Of course.”

Every season, I had pitched that Lassiter goes crazy and grows this huge beard and comes back as Serpico, but on Psych the problem was that the seasonal opener always picked up right where the last season ended. So, it never fit. I couldn’t sell that one. The good news is that I finally got the beard in, which I was beyond happy for. 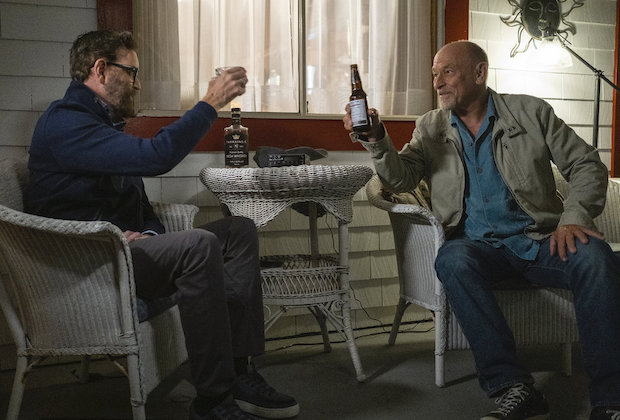 TVLINE | I screened Psych 3 last night, and Lassiter has a very interesting journey this time. It’s almost a bit serious.
This is the amazing thing about what Steve and James did, it really does mirror my personal journey. It’s amazing how each of these movies has really mapped my recovery. It’s a pretty incredible thing to have that benchmark, to really mark where I’m at and where I’m going. So yes, this is definitely a more serious side for Lassie. He’s at a point in his life, in his recovery, where he’s trying to figure out — much like for me, it’s an existential crisis — what he wants to be, what he can be, and what he’s going to be. Like, I certainly had a question of how much I could work as an actor after my injury, and it’s been a slow, steady climb back. I mean, I’m certainly not back chasing bad guys in the street with a gun or riding a horse, but everybody in my Psych family created such an amazingly warm atmosphere for me to try and get back in the saddle, that I knew if I fell that they would be right there to catch me. Again, I am so blessed to have these people in my lives, still making opportunities for me within the new framework of what I can do.

TVLINE | I don’t think it’s spoiling anything to say you have a really wonderful scene with Corbin Bernsen (as Henry).
Yeah, that really was a huge day for me, and emotionally for Lassiter. It’s also the first time we see Lassiter interact with [his daughter] Lily, other than a scene early on in the series, when I was holding her as a baby. So, we get to see an 11-year-old Lily, and she’s a terrific little actress they brought in (The Baby-Sitters Club‘s Sophia Reid-Gantzert), which really helped ground me and put everything into focus for Lassiter as a father looking forward with his life. 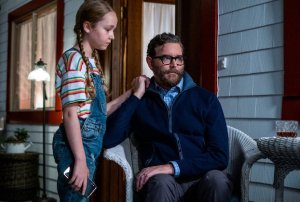 And yes, that scene with Corbin on the porch was so sweet. I’ve gotten to work with Corbin pretty rarely. I mean, we’ve had a few scenes [over the years], but I think the beginning of a really beautiful friendship for these two is starting to develop.

TVLINE | What’s interesting is that when watching these latest Lassie scenes, I would try to “superimpose” into them what the character used to be, his more pompous self, and it’s really incredible to see the evolution he has gone through.
Yeah, and that’s sort of the rub of his pompous self and my personal pompous self. A great humility is given to you when you have a health crisis like this, and try to reconcile of who he was and who I was, and what I am now and where we are both going…. God, they wrote the neatest gift, and Steven directing was pretty much like, “You guys, just talk.” And Corbin and I are pretty close — he did a lot for me, he directed me in a film once — and he’s a very soulful, deep guy. In fact, my [real-life] daughter Lily has had such really amazing conversations with him, and she called him “Yoda Corbin.” So, to have Corbin there with me in those scenes was really a just incredible treat. He’s such a good actor, and we didn’t get to see a lot of his range on the show over the years — there’s a lot of “grumpy Henry” — so this was really a beautiful, touching, grounding, quiet scene between the two of us.

TVLINE | Lassiter also — for reasons we won’t disclose — participates in a snowball fight.
I’m still not super-steady on my feet, and when throwing I’m not using a cane in my right hand, so I wasn’t sure how I would do with that. I’m not doing too much physical stuff like that. But I think that in the first rehearsal, I nailed Dulé right in the jewels. [Laughs] By accident. I wish I could aim that well. But [executive producer] Chris Henze was apparently rather impressed with my other throwing ability, and his son’s a big baseball player, so I take that as a high compliment that I can physically do something like that. 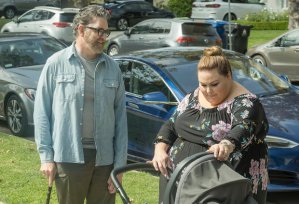 TVLINE | Turning to your other projects: Can we expect to see Gregory in the final season of This Is Us?
I’ve not yet actually heard if I’m going to be in the season yet. I was texting with Mr. [Dan] Fogelman, and he said that, mostly, they’re always looking for a place for the grumpy neighbor. But at this point, I don’t know if I’m going to be in it. I certainly hope to be, but I don’t want to be too greedy. I’m so grateful for what Dan has given me, because of our relationship on Galavant [which Fogelman created]. Dan, in a sense, gave me my career back [with This Is Us], because that was really one of the first times I was in a more straight role, less a comedy thing like Psych. And for Dan to take that chance on me, when I was still not in good shape physically…. Even learning lines now is still pretty difficult for me now, but I feel like each time I was able to be on This Is Us, my work got a little bit better, I felt a little more grounded, and a little more back to my old self, slightly. And then with [Psych 3:] This Is Gus, I felt a bigger jump physically, where it felt like it’s the first time I wasn’t walking around in a suit of armor.

TVLINE | Absolutely. I was happily impressed by the progress you have made.
That’s nice of you, Matt. I certainly look forward to be able to be Lassiter again and run down the street chasing a bad guy, or driving a car. What I’d really like to do is get back on a horse, like in the Galavant days. 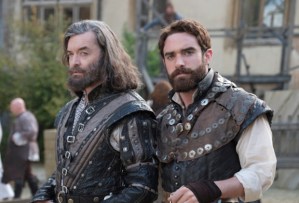 TVLINE | Speaking of which, do you ever pick Dan’s brain about what the plan was for Galavant Season 3?
I have with John Hoberg and Kat Likkel, our showrunners for Season 2, and there were plans, there were ideas — let’s just say that. There were sort of big ideas of what they would like it to be, and all I can say is that it would’ve been epic.

Want scoop on Psych 3, or for any TV show? Email InsideLine@tvline.com and your question may be answered via Matt’s Inside Line.

20 Pieces Of Clothing From Lulus That’ll Guarantee A Minimum Of 1,000 Compliments

‘Jersey Shore’: Angelina Cries As She Fears She May Never Have A Child Amidst Divorce

20 Pieces Of Clothing From Lulus That’ll Guarantee A...

Meghan Markle Is ‘Happy Her Name Has Been Cleared’...