The 4400 may be one step closer to getting their lives back, and it’s all thanks to a rather ballsy choice by LaDonna Landry.

In this past Monday’s episode, flashbacks revealed that the seemingly superficial reality star is hiding intelligence and depth underneath her pretty exterior — and when DHS didn’t make good on the deal they cut with her, LaDonna got smart: She leaked a video to Shanice’s daughter of the true conditions under which the 4400 are being held.

With Mariah blasting the damning footage across the web, there will be repercussions for both the government and the abductees in next Monday’s episode (The CW, 9/8c). “The public is going to take that video and do what they want with it, react how they will,” Khailah Johnson, who plays LaDonna, tells TVLine. “That’s going to have an effect, inside and outside, on all fronts. Things go viral every day. They have big impact and make a lot of change — the power of the Internet.”

Below, Johnson also talks LaDonna’s “valuable” superpower, teaming up with Andre to solve a major mystery and her potential feelings for a certain enemy of the 4400.

TVLINE | We got a lot of insight into LaDonna and her past in the last episode. What surprised you most about her backstory?
Honestly, what surprised me the most was how much she let people run her life. She was very submissive, because she had to be and she felt the need to be. That was her mom, her parental figure, and her job. But she would try and try, and at some point, she just gave up. That was surprising to me.

TVLINE | She also finally got a superpower. What did you think of her ability?
It’s awesome! It’s very much, “I want it, I got it!” and that’s her in a nutshell. [Laughs] It’s, really, also very valuable. She can make anything happen, which is pretty, pretty, pretty cool, and it’ll become a great advantage for everyone.

TVLINE | What exactly are the rules of her power? How does it work?
That will become more clear in the next episode. But whatever she wants to see, she can make visible.

TVLINE | At the moment that she was taken by the green light, she was plunging to her death. Does it come up in future episodes whether the 4400 can go back? Do they want to go back? And if they do, does that spell death for LaDonna?
After they went back to Belle Isle in the second episode and nothing happened, I think that phenomenon for them kind of went out the window. I don’t think that’s in their brains right now. They’re more trying to be focused on how to integrate themselves to now and deal with now. But also, LaDonna doesn’t want to even think about that anymore, because she won’t know what happens if they were all to go back — if they would revert [to] a little bit before, or if it would be that exact moment, and that’s pretty scary to her.

TVLINE | For LaDonna, are there consequences for the fact that she released that video?
Most definitely. I’ll say the consequences are very within herself. [Laughs] A lot of the time, she’s used to acting without thinking, and this may be a time where she has to reflect on that.

TVLINE | The other 4400 were not happy that she was cooperating with the government. Will what she did with releasing this video earn her any points with the other 4400?
I think so. She’s trying to gain their trust back, and some will see that she didn’t have ill intentions by becoming quote-unquote “a sellout.” She fell into old habits, and people will see that. 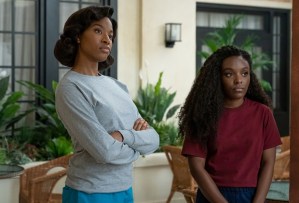 TVLINE | Who would you say are her biggest allies within the group right now?
Definitely Claudette and Andre. They’ve taken the time to get to know her and see her, and I feel like that’s the first time anybody has seen her and realized her worth and value. So she’s definitely gravitating towards them, always, and they deem her smart enough to help figure out what’s going on. They want her [to be] a part of their group to solve this mystery, and she takes great pride in that.

TVLINE | She and Andre are now working together on this secret project. What can we expect moving forward with that storyline and also her friendship/partnership with Andre?
Andre brings out the best in her, and he very much encourages her to embrace her knowledge and her expertise in life. So with the knowledge they have — his from the past and hers from the current times — they are going to make headway. They’re going to figure some stuff out. They’re really trying to do what’s best for the majority, and with the brainpower they have, [they] will come up with something good. 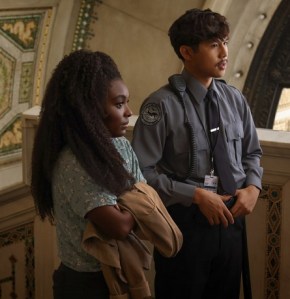 TVLINE | And what’s going on with her and Steve the cop? Does she have genuine feelings for him, or is she just using him?
He’s fun to have around. [Laughs] He’s giving her googly eyes. She’s reveling in it. She misses being the center of attention and feeling pretty. [But] he is on the other side. So she becomes aware of that and that determines how close she decides to get to him.

People Are Sharing 15 Of The Most Overrated And Underrated Cocktails Of All Time, And I Agree With 50% Of Them

People Are Sharing 15 Of The Most Overrated And...