Kyle Rittenhouse Found Not Guilty on All Charges in Homicide Case

Kyle Rittenhouse has just been found not guilty on all charges in the Kenosha shooting case.

Rittenhouse choked back tears as the verdict was read.

It’s been a long 2 weeks and change of proceedings, with prosecutors for the State of Wisconsin trying to make their case … namely, that Rittenhouse was perceived as an active shooter that night, and that he did NOT have the right to use deadly force against protesters.

The prosecution also painted Rittenhouse as an underage John Wayne — he was just 17 at the time of the incident — who apparently thought he was entitled to patrol the streets of Kenosha in the aftermath of the Jacob Blake shooting … and who provoked and drew the ire of demonstrators by bringing along an AR-15 rifle.

That said … it would appear their characterization of things weren’t always holding up very well in front of the jury — as Rittenhouse’s defense team claimed their client only shot when he felt his life was in mortal danger, and only enough to neutralize threats he considered deadly in the moment. Based on the evidence, it seems the jury mostly agreed with that.

Another element that surely helped Rittenhouse … the fact that he and others testified to hearing Rosenbaum — the first person shot that night — threatening to kill KR and others in his patrol group … among other unruly behavior many claim he was engaged in that night.

Rittenhouse says he was eventually ambushed by Rosenbaum after losing track of his crew in the streets, and was then chased by the deceased … until Kyle turned around and shot him. He claimed Rosenbaum lunged at his gun, and that he felt his safety was compromised.

While running away from that scene, he began to get chased anew by a crowd … with a few members getting their licks in by hitting him with a skateboard, kicking him while he was down … and approaching him with a handgun. Here, too, he claimed he feared for his life — and felt he needed to fire his rifle in what Rittenhouse’s team says was self-defense.

There were several key moments from the trial … including the Assistant D.A. Thomas Binger constantly getting scolded and rebuffed by Judge Bruce Schroeder — especially when Binger tried classifying Rittenhouse’s silence after his arrest as a sign of guilt … a big legal no-no.

Of course, there was also the moment Kyle himself took the stand in his own defense — during which he broke down and cried while recounting the shootings. 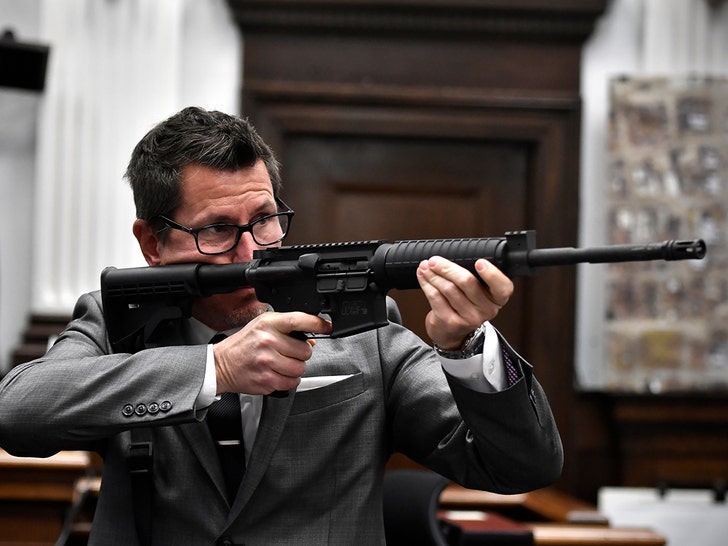 Binger pointing Rittenhouse’s actual gun at the jury during closing arguments was a highlight … which he seemed to do for dramatic effect in making his final point, but which also caught a lot of backlash for what many considered a reckless and unsafe demonstration.

Now that Rittenhouse’s fate is sealed … there is a new round of protests expected in the city, and officials are preparing for the worse (again).

Baahubali: Before The Beginning Worth 150 Crores Shelved By Netflix? Here’s The Truth

Adele Show Postponed Because of Disputes, Not COVID, Sources