Weekend predictions: our model predicts Ghostbusters will win the weekend – The Numbers


With no major new releases this weekend, the race at the box office will be between returning films, and our model thinks we’ll have a surprise winner. After trailing Encanto by just $3 million over the Friday–Sunday portion of the Thanksgiving Holiday, Ghostbusters: Afterlife is favored to win this weekend by a similar margin.

Here’s the full rundown of predictions for the top 10. 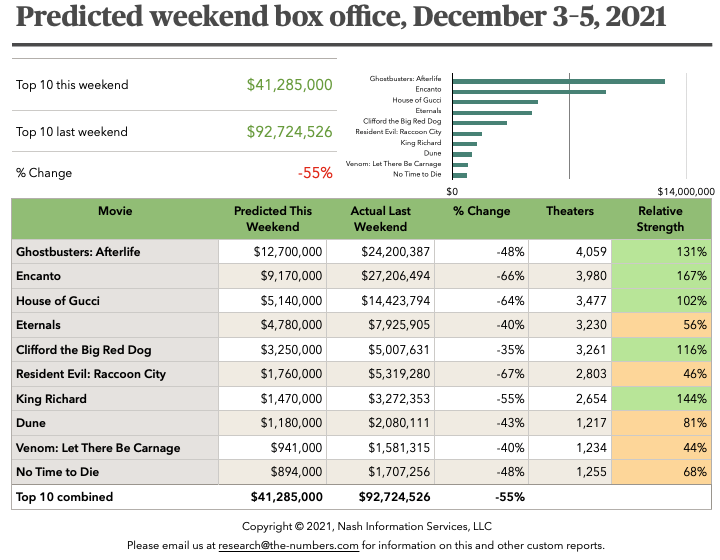 The weekend after Thanksgiving is often one of the slowest of the year as studios skip releasing anything new and instead keep their powder dry for the last couple of weekends before the end of the year. There’s also a slump in attendance as people start their Christmas shopping. When those things are factored together, we’re looking at a weekend that will be down around 50–60% from the last three-day weekend.

What works in Ghostbusters’ favor is that it will playing for a third weekend, which usually means a much smaller drop-off than the second weekend. I think seasonal factors could play a role, though, and it wouldn’t be much of a surprise if Encanto came much closer to the top than the model thinks, or even wins the weekend.

One other film to look out for on the chart is House of Gucci, which is getting excellent buzz and could get a good hold thanks to its appeal to an older demographic. Notably, it topped the daily chart on Tuesday and Wednesday, in spite of being a fairly distant third last weekend. Winning this weekend would be a big surprise, but I expect it’ll fall more like 50%, rather than the 64% predicted by the model. That would give it a weekend around $7 million.

One final note: we don’t have a prediction for Christmas with The Chosen: The Messengers, which is getting a special release through Fathom Events. We don’t expect any official numbers to be released for that event film, but it will almost certainly be lurking somewhere in the top 10, and we’ll be looking out to see if any information is released.