One of the main reasons people come to Twitter is to keep informed about their interests and be entertained. Over the years, Twitter has become an essential part of people’s entertainment journey and experience, connecting them to their favorite artists and people who care about the same things. Entertainment conversations on the service aren’t limited to just films and television, but also cover cultural topics like fandom, fashion, and so much more. Alia Bhatt who has impressed the audience with her versatility onscreen has emerged as the most tweeted about Bollywood actors (Female) in India. She has beat the likes of Priyanka Chopra Jonas and Deepika Padukone for the top spot.

Alia Bhatt dominated conversations thanks to an exciting line-up of movies – from Brahmastra and RRR to Gangubai Kathiawadi – the actor’s fans are excited about what she’s got in store for them. Alongside Alia, Priyanka Chopra’s fans were also talking about her upcoming movie Jee Le Zara. Priyanka’s interview with Oprah Winfrey and other professional developments kept people talking about the desi girl. Priyanka, as well as Disha Patani also stirred conversations for their fashion choices. Disha received fans’ vote of approval for her movie Radhe which was released earlier this year. 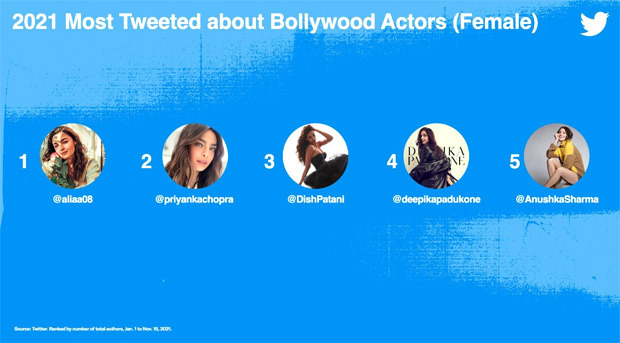 As Deepika Padukone completed 14 years in the film industry, fans celebrated with conversations using #14YearsofDeepikaPadukone. Fans also cheered for Anushka Sharma as she welcomed motherhood and gave birth to a daughter. While she was not seen on screen, the actress has been making noise with her production house Clean Slate Filmz by producing content-oriented titles. After producing Paatal Lok and Bulbbul in 2020, Clean Slate Filmz announced their projects Mai and Qala this year.

‘Karthikeya 2’ Producer Thanked The Audience For Making It...