Travis Scott is breaking his silence for the first time since Astroworld, insisting he didn’t know the severity of what was happening in the crowd, and alleging the person in his ear never expressed an urgency to immediately stop the show.

Travis sat down with Charlamagne tha God for nearly an hour to talk all things about the tragic Houston festival. Travis says he feels a sense of responsibility to figure out what went wrong, but did everything he could with the knowledge he had during the show.

Travis claims his “in-ear” told him to end the show “after the guest” AKA Drake, and that he was never told just how bad things were in the crowd. 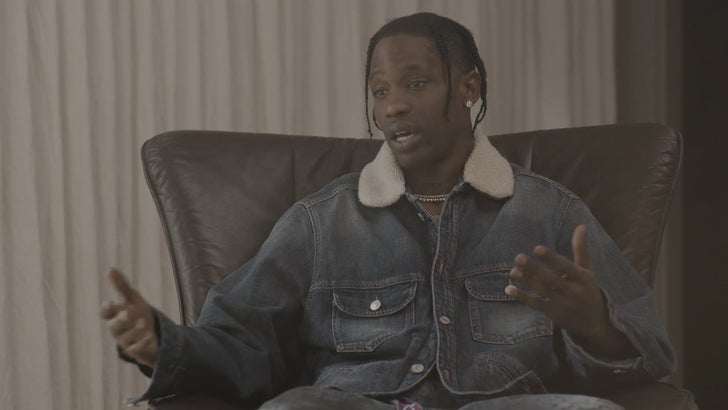 At times, Travis was clearly emotional — especially when talking about the families who lost loved ones — and even says he’s met with some of them privately.

Travis says, “They lost their loved ones, I just always wanna be there for them, I’m gonna fix this problem and make sure this doesn’t happen in the future and be the number one voice for this. We gotta figure it out.”

Charlamagne asked Travis if he felt a sense of responsibility for what happened, and while Travis admits he was the face of the festival, he says he feels his responsibility is now to figure out what went wrong and how to prevent it in the future. In other words, he never takes responsibility, nor does he lay the blame on anyone else.

While he was pressured several times to say who was responsible, TS never gives a straight answer — mostly preaching a message of future prevention.

He does, however, say as an artist, he and his team focus on the creativity of the show … not so much the safety and logistics — something that’s handled by promoters.

One safety possibility Travis suggests — though how exactly it would work is still in the air — is to equip fan festival wristbands with health and location trackers to pinpoint issues in the crowd.

Scott was heavily criticized for photos showing him golfing with Mark Wahlberg and Michael Jordan over Thanksgiving. Charlamagne asks Travis why he chose to go, and while he didn’t really expand, Travis said Mark and Jordan were good people for him to be around, and it was just a thing for the holiday.

Finally, near the end of the interview, Charlamagne asks Travis if he’ll ever be able to get over or forgive himself for what happened, to which Travis replies, “It’s tough, my intentions weren’t to hurt or harm their families, I wanted them to have a good experience, when my fans came to see me its a connection.”

‘The Family Man’ actress Priyamani showers praise on her ‘Maidaan’ co-star Ajay Devgn, calls him a ‘fine actor’ with ‘intense eyes’ – Times of...