Weekend predictions: West Side Story may edge out Encanto for top spot this weekend – The Numbers


This is shaping up to be an interesting weekend at the box office, with three movies having a theoretical shot at coming out on top. Our model marginally favors Encanto, which should have a strong hold as Holiday Season hots up. West Side Story is hot on its heels though, and could easily come out on top based on its $800,000 in previews on Thursday. Even Ghostbusters: Afterlife has an outside shot at pulling off a surprise win.

As usual for major releases, our Friday-morning prediction for West Side Story is based on a combination of our “fundamentals” analysis for the movie and Thursday’s preview numbers. 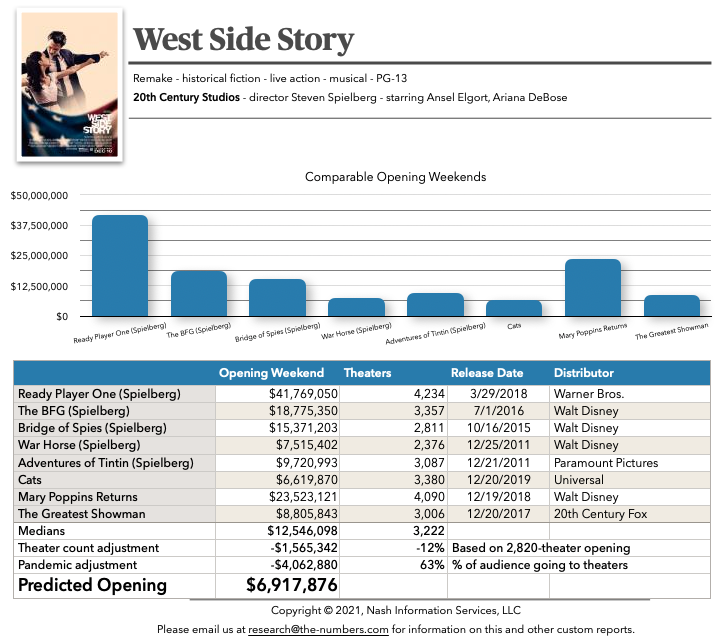 The fundamentals model for West Side Story doesn’t bode particularly well for the film, partly because Steven Spielberg has an inconsistent record on opening weekend in recent years, and partly because musicals do too. The fact that West Side Story is opening in just 2,820 theaters doesn’t help either. Everything about this release speaks to a hope on the part of 20th Century Studios (aka Disney) that the film will open solidly and then hold on very strongly through the rest of December and into the New Year. The Greatest Showman is the most obvious model for that strategy, and it went on to earn $174 million domestically after opening with a disappointing $8.8 million.

In other words, we shouldn’t put too much stock in how West Side Story performs on opening weekend, because its ultimate success will depend on its legs (and on some Awards Season buzz). Even so, earning $800,000 in previews will set it up well for this weekend. Musicals tend to have a high opening weekend multiplier, with around 12 times the preview earnings for the full weekend. If West Side Story does that it’ll come in around $9.6 million. Something over $10 million can’t be ruled out, in fact. But our model uses the average of the fundamentals prediction and the previews prediction as its final number, and that says a weekend of $8.27 million is what we should expect at this stage. 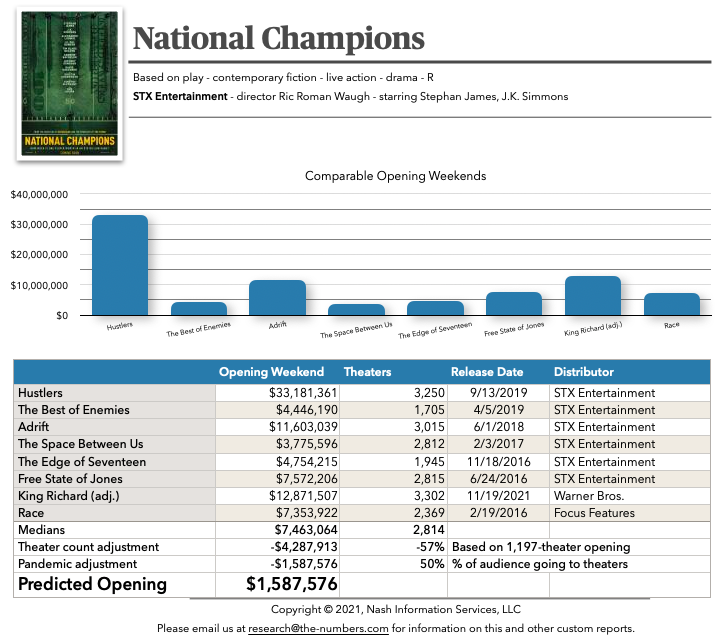 National Champions looks set for a modest opening. Its distributor, STX Entertainment has only released one previous film in theaters this year, The Mauritanian back in January. The release of National Champions also comes just days after it was announced that Jahm Najafi is buying the company from Eros International. As the chart above shows, STX has a decent track record of releasing dramas wide, but only has one out-and-out hit—2019’s Hustlers. Anything over $1.5 million should be considered a success for National Champions. 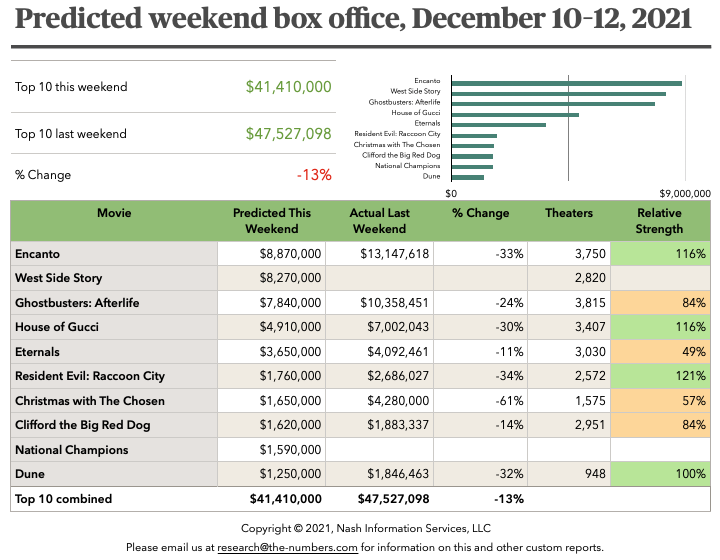 Among returning films, the model thinks both Encanto and Ghostbusters: Afterlife will hold on strongly, and technically either of those movies could top West Side Story at the box office this weekend. I think the model is being overly bearish on West Side Story though, and the musical will ultimately win the weekend. $10 million is still on the cards, based on its preview numbers, but that might be as far as it gets for now. Given its potential broad appeal, I can easily imagine it continuing around the $10 million mark each weekend through to the New Year though, particularly if it picks up more theaters over time. That’s going to be the real test.

Tom Cruise Is Being Boring at Cannes