What Will Happen to ‘The Daily Show’ After Trevor Noah?

When Trevor Noah announced to his studio audience on September 28 that he would step down from Comedy Central’s “The Daily Show,” it was a shock — to the audience; to the staffers and Paramount Global executives; and even to MTV Entertainment CEO Chris McCarthy, who oversees Comedy Central and had lunch with Noah the day before the announcement. And let’s not forget the publicists; Noah’s to-camera announcement meant news broke on social media before the episode aired.

A person close to production confirmed the lunch meeting, that Noah gave no indication of his impending exit, and virtually everyone on and around the show was “blindsided.” Comedy Central is currently building out a timeline for his departure, with Noah and his team aiding in the transition. Despite speculation that the new “Daily Show” would go to streaming, the source close to production told IndieWire that the new program will remain on Comedy Central.

“We are grateful to Trevor for our amazing partnership over the past seven years. With no timetable for his departure, we’re working together on next steps,” a Comedy Central spokesperson said in the official statement provided to IndieWire. “As we look ahead, we’re excited for the next chapter in the 25+ year history of ‘The Daily Show’ as it continues to redefine culture through sharp and hilarious social commentary, helping audiences make sense of the world around them.”

Whoever gets the desk won’t get a lot of Nielsen viewers. That’s certainly no fault of Noah’s; it’s true of almost every linear telecast. In Stewart’s final 2015 season, “The Daily Show” drew 1.309 million total viewers per episode. Over the past 12 months, Noah averaged 372,000 viewers — nearly 1 million fewer, or 72 percent. The show is down 81 percent in ratings in the key demographic of adults 18-49.

Unsurprisingly, Noah’s basic-cable show ratings suffer greatly in comparison to his network counterparts. Noah’s closest competitor, “Late Night with Seth Meyers,” has more than double the viewership with 804,000 total viewers. However, in one area Noah dominates everyone: “The Daily Show” currently has the most engaged social audience in late night.

“The Daily Show” gained 31 million social followers since he took over from Stewart, for a total of 45 million per Domo data. According to TubularLabs, Noah’s version has amassed more than 15 billion views. It’s received the most mentions and post comments thus far this year, per ListenFirst. Year-to-date the series has more than 1.8 billion views across social and more than 31 billion minutes watched, per Domo. 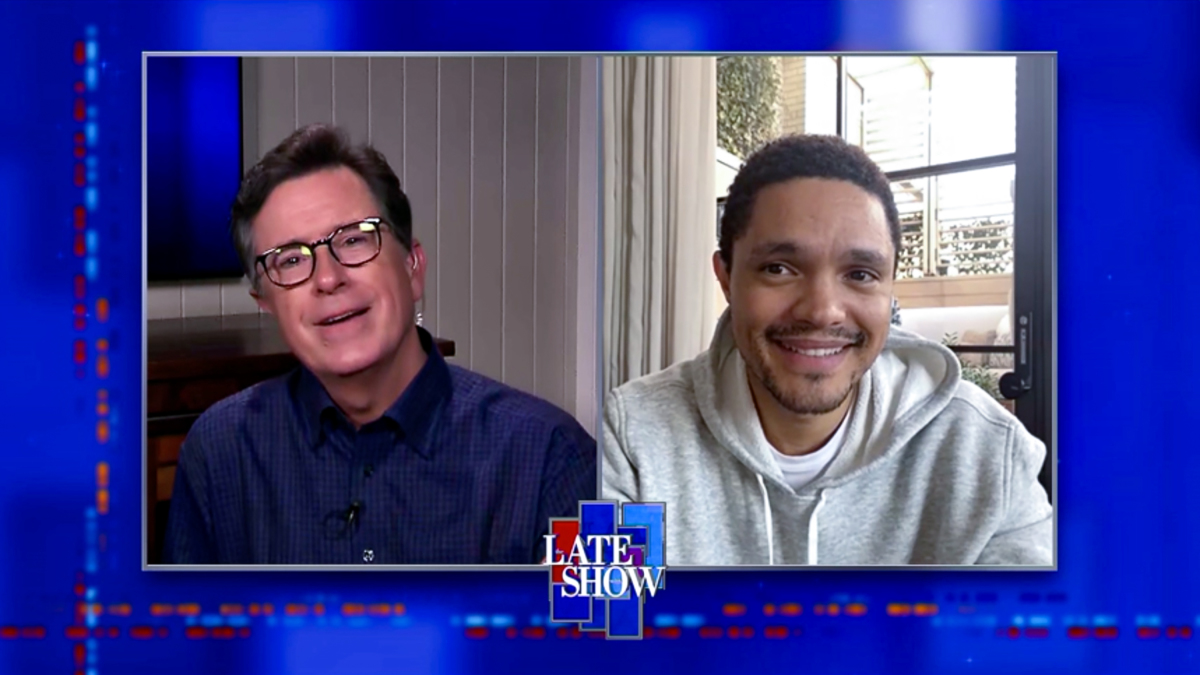 Stephen Colbert and Trevor Noah on “The Late Show”

So who might be the next face for “the next phase?” Maybe Roy Wood, Jr., a regular correspondent for the program since 2015 and the very first person Noah mentioned in his announcement. Or Ronny Chieng, the second person Noah shouted out. Correspondent Desi Lydic didn’t get a name drop, but she’s another possibility (On speculation about Wood, Jr., a Comedy Central spokesperson shared the following statement: “In time, we will turn to the next chapter of ‘The Daily Show’ and all of our incredible correspondents will be at the top of that list. Until then, we are focused on celebrating Trevor and thanking him for his many contributions.”)

Noah could be succeeded by contributor Jordan Klepper, but he’s carved out a nice niche supporting the show with longer-form work from the field. Maybe alum Samantha Bee, who recently wrapped up a run at TBS, won’t be out of the late-night game after all. She could bring husband and former fellow “Daily Show” correspondent Jason Jones, who also left for TBS, back with her.

It almost certainly will not be Stewart, who is under a multi-year deal at Apple TV+. A person with knowledge of the agreement told IndieWire that contract signed in 2020 still has several years remaining. Apple’s Emmy-nominated “The Problem With Jon Stewart” rolls out episodes every week or two — a much lighter workload for the guy who hosted 2,584 “Daily Show” episodes. Per IMDb, Noah has hosted 1,060 episodes thus far; O.G. host Craig Kilborn left after 380.

Or, maybe the person to fill Noah’s shoes will be someone who is just like he was: Although he was a famous comedian in his native South Africa, Noah was all but unknown stateside when he debuted on “The Daily Show” as its senior international correspondent on December 4, 2014. Within four months, he was named host.

Watch Noah’s Thursday night announcement below. It’s already surpassed 1 million YouTube views. A rep for Noah did not immediately respond to IndieWire’s request for comment on this story.

And for a trip down memory lane, here is Jon’s from seven years earlier:

Sign Up: Stay on top of the latest breaking film and TV news! Sign up for our Email Newsletters here.

Collin Gosselin Is Close to Hannah, But Does He...