Sara Ali Khan wished grandmother and veteran actor Sharmila Tagore on her 78th birthday by posting a picture collage. She posted a throwback picture of herself with Sharmila Tagore along with a relatively recent picture and she wrote: “Happiest birthday my dearest Badi Amma. Thank you for being our rock solid pillar of support. I love you so much. And I truly aspire to be 1/10th the woman you are.” Sara added the hashtags #grace, #beauty and #intelligence to her post. Meanwhile, Sharmila Tagore’s daughter Saba Ali Khan shared a special video on her Instagram profile which had Sharmila Tagore’s throwback pictures and she captioned it: “Happy Birthday Ammmmma! Memories… moments. Just… memories for life.” She added the hashtags #memories, #happybirthday, #loveyou to her post.

This is what Sara Ali Khan posted: 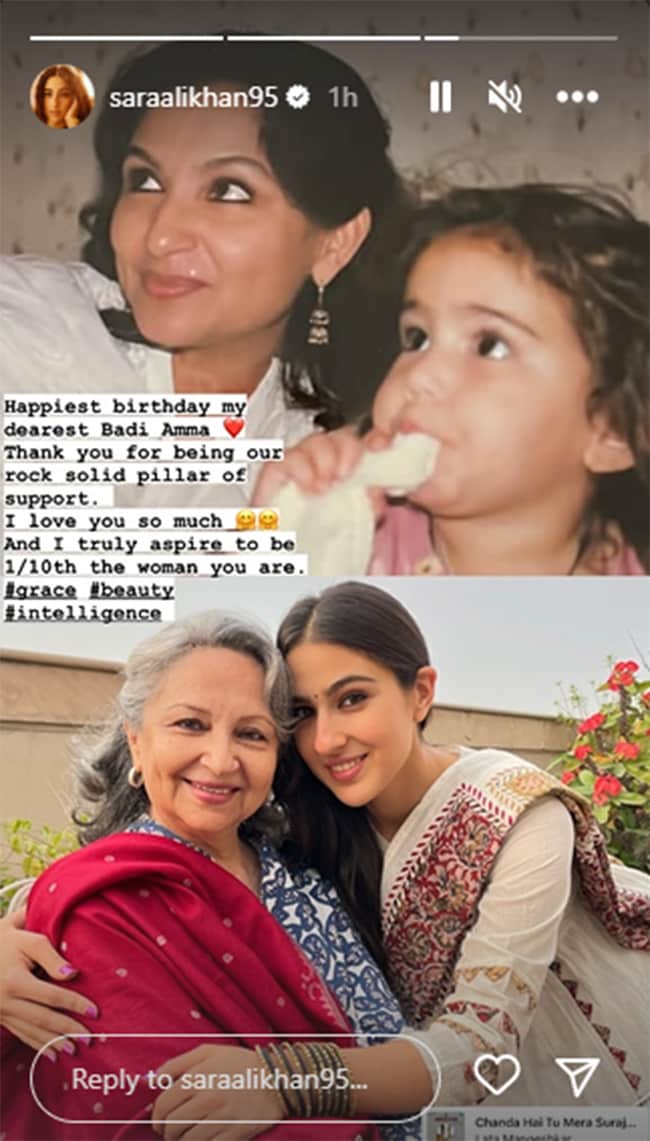 Sharmila Tagore, who was launched by the iconic filmmaker Satyajit Ray in the 1959 Bengali film Apur Sansar, stepped into Bollywood with the 1964 film Kashmir Ki Kali. She has worked in many successful Bollywood films like Aradhana, Chupke Chupke, Amar Prem among others.

Sara, daughter of Saif Ali Khan and his ex-wife Amrita Singh, made her Bollywood debut in 2018, has featured in films such as Kedarnath (her debut film), opposite late actor Sushant Singh Rajput, Simmba, co-starring Ranveer Singh and Love Aaj Kal with Kartik Aaryan. She also featured in the Coolie No 1 remake, co-starring Varun Dhawan. Sara was last seen in Atrangi Re, co-starring Akshay Kumar and Dhanush.

Featured Video Of The Day

When FRIENDS’ ‘Rachel’ Kissed Ellen DeGeneres On Her Lips...

Aamir Ali On Those Shamita Shetty Dating Rumours: “Was...