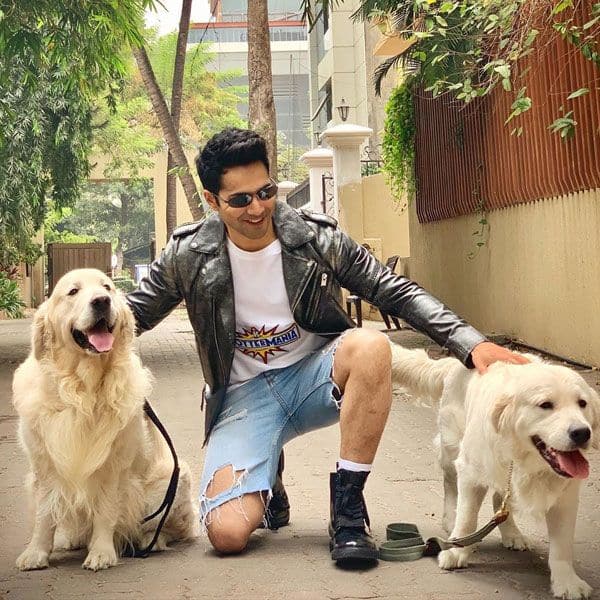 The young superstar of Bollywood, Varun Dhawan is currently busy in promoting his upcoming flick Street Dancer 3D. During the promotional events and tours, many pictures of the star cast went viral. Even yesterday, during the promotion Varun shared his picture with two golden retrievers. He wore a white t-shirt with a black leather jacket and ripped denim shorts and adorably posed with them. The Kalank actor posted the pic with a god emoticon.

While the pic was full of cuteness, Varun’s Sui Dhaaga co-star Anushka Sharma, who herself is a dog lover posted a hilarious comment and asked are these furballs responsible for his ripped jeans as she wrote, “Are these doggos guilty of biting off your jeans?”. Earlier also, we saw actress Shraddha Kapoor posting a quirky comment, when Varun shared the first look of his upcoming film Mr. Lele, where she wrote, “Looks like you’ve stolen my dad’s kachcha. Love it chirkut.”

Talking about Street Dancer 3D, it is directed by Remo D’Souza. The dance-based film is slated to hit theatres on January 24 and will clash with Kangana Ranaut’s Panga at the box office. It also stars Shraddha Kapoor, Prabhu Deva and Nora Fatehi. Varun Dhawan will also be seen in “Coolie No. 1”. The film is directed by Varun’s father David Dhawan. It is a remake of the 1995 hit film of the same name, which starred Govinda and Karisma Kapoor. So, are you excited to watch Varun and Shraddha in a dancing avatar again? Tweet to us @bollywood_life.