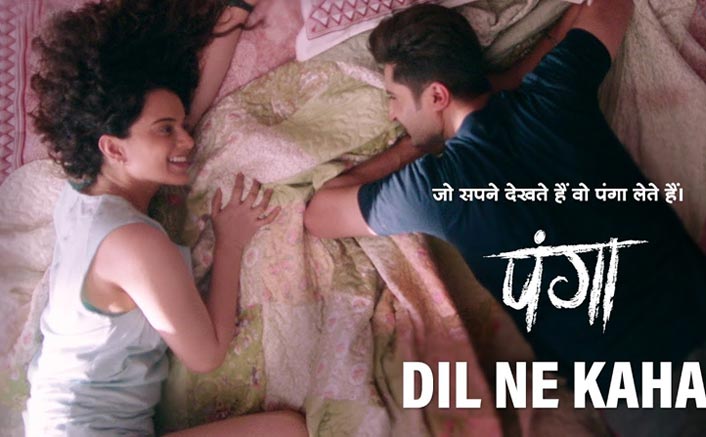 Dil Ne Kaha From Panga Out! Kangana Ranaut & Jassie Gill’s Budding Romance Will Make You Miss Your Better Half

Panga starring Kangana Ranaut and Jassie Gill is making all the right kind of noises. The trailer and poster of the film have already spread the magic and now the songs of the film are making the audience excited for the film even more. After releasing the first song titled Panga Title Track, the makers have now treated the fans with the second track titled Dil Ne Kaha.

Dil Ne Kaha is a slow, romantic track that portrays the budding romance between Kangana and Jassie’s character. The lovebirds are seen roaming around the city, laughing together, dancing and spending some memorable time together. The song features a few shots of Jassie Gill recording the song in studio as well.

The song is crooned by Jassie Gill & Asees Kaur. The chorus is done by Shrinidhi Ghatate, Madhura Paranjpe, Mani Mahadevan, Shivam Mahadevan, Arsh Mohammed & Ravi Mishra. Javed Akhtar has lent is words to this soulful song. The song is produced by Meghdeep Bose and the music is created by Gaurav Dev, Kartik Dev.

Check out the song right here:

Earlier, Deepika Padukone spoke about Kangana Ranaut’s upcoming release, Panga and praised its trailer. The Chhapaak actress had said, “I watch a lot of trailers for films with my cast and when I get time, I watch these films as an audience. Panga’s trailer impressed me a lot. Looking at this trailer, which is painted by Kangana Ranaut’s performance, it seems that this film will also be very good.”

Kangana even thanked the actress for the appreciation while Kangana’s sister, Rangoli Chandel acknowledged DP’s appreciation of her sister with a tweet that has a series of folded hands emoji.