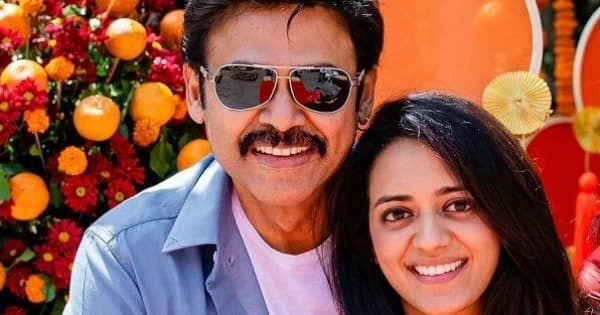 Venkatesh Daggubati’s Narappa, which recently released on Amazon Prime Video, has been garnering rave reviews from the audience. Apart from the direction and narrative, the viewers have also praised the impeccable performances of the lead cast. While fans are claiming that Venkatesh has given his career best performance in this hard-hitting drama, Venky‘s daughter has watched the film and showered her love on father. Also Read – From Radha Ravi’s comments about Nayanthara to Vishal getting injured, here’s what happened in South this week

Sharing her pic with father Venkatesh, Aashritha wrote, Watched your movie Narappa and it was truly an emotional roller coaster! INCREDIBLE performance! I wish I was back at home watching it first day first show on the big screen as we always do but times have changed and I’m also so far away. But that won’t stop me from praising you because you deserve every praise that words can offer. You have outdone yourself! What a look, what a role and what a performance! You never cease to inspire and amaze!” Also Read – THIS video of Salman Khan and Venkatesh Daggubati dancing at his daughter’s wedding is breaking the internet

She added, “You know why you were so amazing in the film playing the role of a father who would go to any lengths for his family? Because it is who YOU ARE! You truly are the greatest and the most amazing father. You’re the PUREST soul on and off screen. You are strong, gentle, calm, funny, humble, thoughtful, empathetic, giving, disciplined, incredibly hard working, fierce, principled, kind, brave and most of all, infinitely loving. If I am half the person you are in life, I will consider that my greatest achievement. There’s absolutely NO ONE else like you. I’m forever grateful for you. Love you infinitely.” Also Read – Venkatesh Daggubati’s daughter Aashritha to get hitched soon – all details here

Directed by Srikanth Addala, the film also features Priyamani, Rao Ramesh, Nassar, Karthik Rathnam, Ammu Abhirami and Rajeev Kanakala in pivotal roles. It is the remake of Dhanush‘s hit Asuran. The music of the film is composed by Mani Sharma. So, have you watched the film? Tweet to us @bollywood_life.

Gehana Vasisth’s lawyer on applying for pre-arrest anticipatory bail: There was a chance that she would have got arrested by the police – Times of India