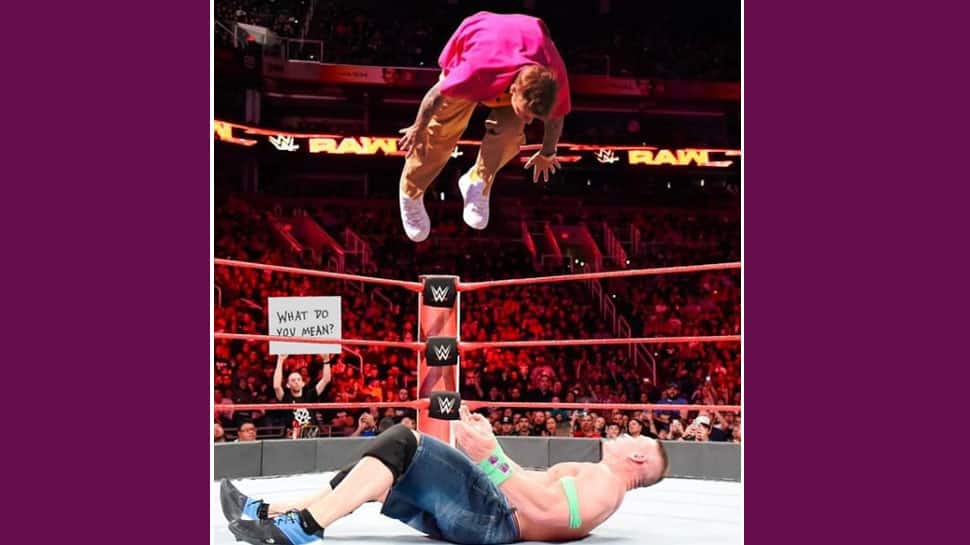 Say Whaaat? John Cena invites ‘Yummy’ singer Justin Bieber to fight it out in the ring!

New Delhi: Popular wrestler John Cena has hit the headlines and this time there’s a Justin Bieber connection to it! Well, it so happened that Bieber fans started off a meme fest of one os his pictures of falling off a unicycle and the international music sensation shared some of the hilarious ones.

Bieber posted one such photoshopped meme of him and Cena in the wrestling ring.

Needless to say that the photo went viral on social media. Soon, Cena too replied with a similar edited picture of Bieber sitting inside the Wrestle Mania path. Check out both the photos:

After this social media exchange, Cena, who co-hosted a show on Entertainment Tonight (ETOnline) challenged the ‘Yummy’ hitmaker to see him inside the ring. ETOnline.com quoted Cena as saying in the interview, “Okay Bieber, listen up. If you want to tussle with the great John Cena, I will ripe off your [bleep], do a month worth of leg days and hand it back to you so you can walk around like Justin Bieb-dashian! You don’t want any of this. You still can’t see me, son!”

“Sorry, what happened? I blacked out for like 60 seconds there.”

He further added, “Young kid, trying to find his way through life, doing all sorts of crazy stuff, just kind of figuring it out. I dig that. And on top of it, he makes good music.”

Cena added, “And I think he wants to fight me at WrestleMania?. That’ll be awesome, it’s out of my hands, but Bieber — you know where to find me!”

On the work front, Bieber’s recent song ‘Yummy’ has already become a chartbuster and John Cena has ‘Dolittle’ up for release on January 17, 2020.